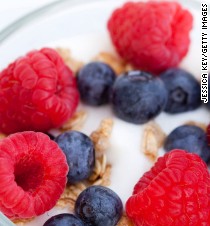 Think you eat well? The truth is, most of us could do a lot better. Some 87% of American adults fall short on the recommended intake of veggies, according to data from the Centers for Disease Control and Prevention, and 92% of us are missing the mark on whole grains. But you don’t need radical meal makeovers to improve your dietjust some subtle, strategic ingredient switcheroos at every meal. “Small ways to fill in those nutritional gaps can make a huge difference over weeks and months,” says Cynthia Sass, RD, author of Slim Down Now.

Try these easy, delicious ideas for breakfast, lunch, dinner, and snacks, plus our favorite carb-smart sides, chain restaurant swaps, and salad bar swaps. You’ll pack in more nutritionand you just might shrink a few sizes, too.

Instead of: Nonfat fruit yogurt

Try: Low-fat or nonfat Greek yogurt topped with fresh berries and unsalted nuts
Benefits: Greek yogurt has nearly double the protein of regular yogurt (9 grams vs. 17 grams per 6-ounce serving) for greater staying power; fresh berries add antioxidants and fiber; and nuts provide healthy fats that slow the release of natural sugars into the bloodstream. Plus you’ll drop nearly 12 grams of added sugarand all for the about the same number of calories.
RELATED: What Can You Make With Greek Yogurt?

Instead of: Fried egg on a toasted English muffin

Try: Hard-boiled egg and avocado on a sprouted whole-grain English muffin
Benefits: Sprouted grains have more protein, fiber, and micronutrients (such as folate, vitamin C, and essential fatty acids), and fewer carbs than plain English muffins. Can’t find sprouted? Go for whole grain (just make sure whole wheat or another whole grain is the first ingredient). Adding a quarter of an avocado provides healthy fats so you’ll feel more satisfied. Boiling the egg instead of frying it in butter eliminates heart-clogging saturated fats. Boil a bunch at once and keep them in the fridge so you can prep this meal quickly in the a.m.

Instead of: Cheddar omelet with two eggs

Try: Veggie avocado omelet with one egg and three egg whites
Benefits: You’ll pack in more proteinthree egg whites have nearly 10 grams of protein, compared to 6.3 grams for a whole eggwhile being cholesterol conscious. An omelet is a great way to sneak veggies into breakfasttry spinach, mushroom, and bell pepper. Plus, you get healthy monounsaturated fat from the avocado (which is also high in potassium and a natural de-bloater). Eliminating the cheese saves 115 calories and 5 grams of saturated fat per ounce.”

Instead of: Store-bought smoothie

Try: Homemade smoothie with 1 cup fresh fruit, a handful of veggies (kale, spinach, celery), 1 Tbsp. almond butter, and 1 cup almond milk or Greek yogurt
Benefits: Making your own smoothie means more veggies and less fruitso you’ll get fewer calories and less sugar, along with plenty of filling fiber. The almond butter provides good fat, which makes you feel satisfied, and which you need in order to absorb many of the antioxidants from the fruits and veggies.
RELATED: 26 Quick, Healthy Juice and Smoothie Recipes

Instead of: Pre-packaged sweetened oatmeal

Try: Homemade oatmeal: Blend together 1/4 cup rolled oats with 1/4 cup unsweetened whey protein powder; add 1/4 cup hot coconut milk (from the dairy aisle); top with a small apple, sliced or chopped, and 1 tsp. cinnamon
Benefits: You’ll ditch the added sugars of the pre-packaged stuff and, by adding protein powder, actually displace some of the oatmeal, trading quick-burning carbs for slow-burning protein. Coconut milk, besides being delicious, adds good fat (medium-chain triglycerides) that boosts metabolism and good cholesterol; the apple provides vitamin C and over 4 grams of fiber; and cinnamon has many health perks, including that it slows stomach emptying and improves insulin sensitivity.

Instead of: Chef’s salad with bacon and cheese

Try: Green salad with salmon, tuna, or sardines
Benefits: The word “salad” doesn’t guarantee nutrition. Swap out the bacon and cheese for fish. It provides the same proteinor moreand adds omega-3 fatty acids, which boost mood, help reduce inflammation in the body, and may help with weight loss (and a 2014 analysis found that we don’t get enough omega-3 fatty acids in our diets). Second best choice is grilled chicken, another lean protein that will save fat and calories over bacon and cheese.

Instead of: Meat and cheese sandwich on a roll with mayo

Try: Meat or cheese sandwich open-faced on whole grain bread with mustard, lettuce, and tomato
Benefits: Eliminate one source of animal protein to halve your saturated fat. Swapping out half the breadand choosing whole grain over whitecuts out around 15 grams of carbs and doubles fiber, which can help lower blood sugar and cholesterol. Dropping mayo for mustard saves saturated fat. If you add hummus instead, you also get more flavor, protein and fiber; add guacamole instead and you get heart-healthy fats and fiber. Lettuce and tomato add phytonutrients plus extra fiber, so you’ll feel fuller longer.

Instead of: Creamy tomato soup

Try: Black bean soup with a dollop of low-fat Greek yogurt
Benefits: Ditching the cream base halves the calories, and beans add tons of filling fiber plus antioxidants, vitamins, and minerals. “Beans are pulses, and studies show that people who eat them tend to weigh less and have smaller waistlines,” Sass says. Switching up the cream for a scoop of Greek yogurt still delivers calcium but without all the saturated fat.
RELATED: 13 Vegetarian Soup Recipes

Instead of: Beef burrito on a flour tortilla with sour cream

Try: Bean burrito bowl with veggies and salsa
Benefits: Ditching the flour tortilla saves up to 350 calories and 58 grams of processed carbs. Pick beans and veggies instead of beef to lose the heart-clogging saturated fat in red meat and score a major boost in both filling fiber and vitamins (beans are one of the highest-fiber foods you can eat). With salsa over sour cream, you get extra nutrients for fewer calories and less fat.

Instead of: Sushi with spicy mayo

Try: Sashimi with wasabi and miso soup
Benefits: Sushi is made with white rice, which offers little nutrition for its 29-gram carb, 133-calorie per quarter-cup price tag. Spicy mayo can add 99 calories and a whopping 11 grams of fat per tablespoon. Sashimi is just the fishwith all its lean protein and omega-3 fatty acids. Top it with wasabi, which is anti-inflammatory and certainly clears the sinuses. Pair it with a small bowl of miso soup; studies from Cornell University show that people who begin a meal with broth-based soup get fuller faster and eat less overall.
RELATED: 14 Ways to Cut Portions Without Feeling Hungry

Instead of: Meatloaf made with ground beef

Try: Meatloaf made with ground turkey, mushrooms, and pureed spinach
Benefits: Turkey has less saturated fat than beef (choose at least 93% lean); the veggies add moisture, flavor, vitamins, minerals, antioxidants, and fiber, and allow you to eat less meat. When you mix pureed baby spinach into the ground meat, you won’t even taste it.

Instead of: Pepperoni pizza on white-flour crust

Try: Veggie pizza on cauliflower crust
Benefits: A cauliflower crust replaces white processed carbs with veggies, upping fiber and other nutrients. Cruciferous veggies are also anti-cancer and heart-healthy, protecting the branches of blood vessels against buildup of plaque. Save on saturated fat by skipping meat toppings (or try a vegetarian “pepperoni”just watch the sodium) and swapping out some of the mozzarella for smaller amounts of a more flavorful cheese like Parmesan.

Instead of: Spaghetti with beef meatballs

Try: Zucchini noodles with turkey meatballs (plus oats) and added veggies
Benefits: Switching from beef to turkey saves saturated fat, as does displacing some of the meat with rolled oats (use them as you would bread crumbs), suggests Lauren Slayton, RD, author of The Little Book of Thin ($14; amazon.com). Make sure to use a low-sugar tomato sauce. “Zoodles” replace carb-heavy pasta with a fresh vegetable that has vitamins, minerals and filling fiber. If you can’t live without real pasta, mix in noodles made with whole wheat, black beans, quinoa, or almond flour, for more fiber and fewer carbs. Top with flavorful veggies of your choicetry bell peppers, broccoli, tomatoes, mushrooms.

Instead of: Fried chicken

Try: Chicken dredged in almond or chickpea flour and baked
Benefits: You’ll save mega calories and carbs and get some added nutrients and fiber. Baking instead of frying slashes calories and prevents the formation of certain cancer-causing compounds which may develop when cooking with oil at high temperatures.

Instead of: Pork stir-fry with store-bought sauce

Instead of: Potato chips

Try: Roasted chickpeas or edamame
Benefits: Whole chickpeas or edamame, roasted in the oven with a bit of vegetable oil spray and sea salt until they’re crunchy, make a delicious, savory snack that boasts more fiber and vitamins than any chip. Not in the mood to DIY? Try The Good Bean Sea Salt Flavor Crispy Crunchy Chickpeas ($16 for 18 ounces; amazon.com) or Seapoint Farms Dry Roasted Edamame ($21 for 12 4-ounce pouches; amazon.com).

Try: Popcorn
Benefits: Popcorn is a whole grain, while crackerseven those made from whole wheat or ancient grainsare a processed food. And because popcorn is filled with air and fiber, it’s very filling, delivering long-lasting crunchy satisfaction. (Use salt sparingly.)
RELATED: 10 Healthy Flavored Popcorn Recipes

Instead of: Cheese and crackers

Try: Cheese and apple slices
Benefits: You lose the refined carbs of the crackers, which will just turn into sugar in your body, and gain instead a fiber- and vitamin-rich whole food with its own natural crunch and sweetness.

Instead of: Fruit-flavored gummies

Instead of: Granola bar

Try: Trail mix made with nuts, seeds, unsweetened dried fruit, and/or dark chocolate chips
Benefits: Though homemade trail mix may have more fat than a bar, it’s heart-healthy mono- and polyunsaturated fat from nuts, which also provide long-lasting energy from protein, something you won’t find in a bar that’s primarily oats or puffed rice. You’ll also lose the added sugars many granola bars are loaded with. Just stick to a handful of trail mix (about 1/4 cup) because the calories add up.
This article originally appeared on Health.com.

← Child Develops Scurvy From Almond Milk-Based Diet
Reality shrivels. This is your life now: 88 days trapped in bed to save a pregnancy →