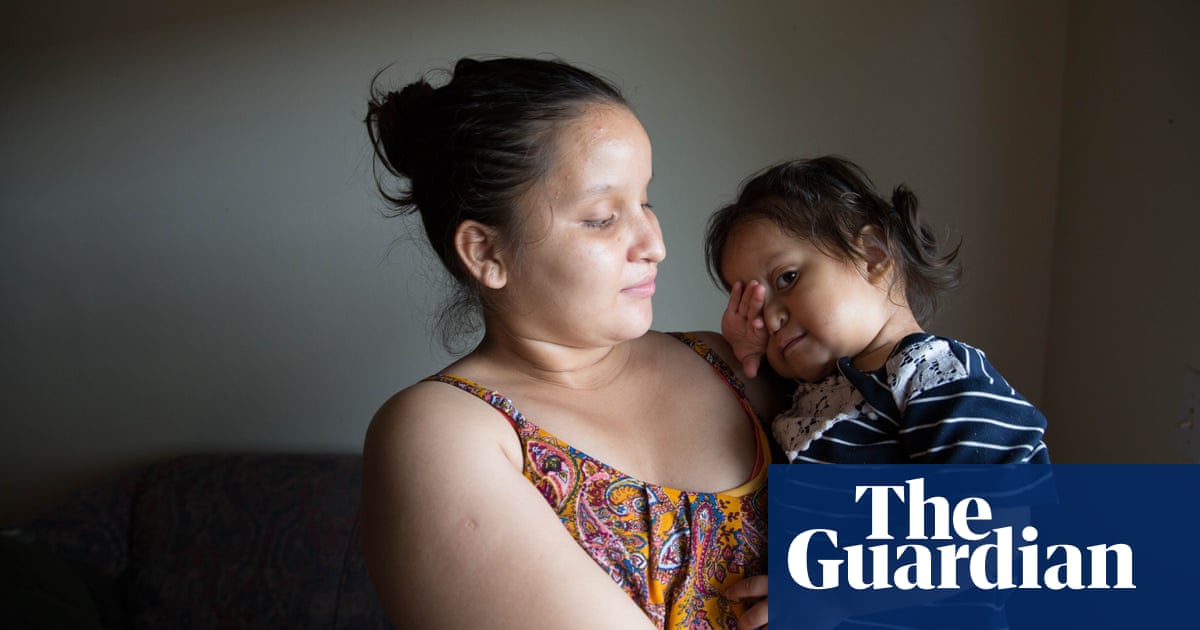 Esther Ramos was 16 years old and two months pregnant with her second child when she, her husband, Fredy Aldana, and their then 19-month-old daughter, Milagro, crossed the border in Tijuana to seek asylum in the US on 13 January.

Upon entry into the San Ysidro border station, Esther and Milagro were separated from Aldana and they havent seen him since. Esther and her daughter spent three days in a Customs and Border Protection (CBP) holding cell, where she said she wasnt offered any food on her first day and she hardly ate during the next two days.

They gave us burritos in the morning and at night and a small sandwich during the day, but I only drank the juice because I was scared I would get sick all of the food looked like it was prepared a really long time ago, Esther said.

Because she and her daughter are both under 18, they were then sent to a facility for unaccompanied minors in San Benito, Texas, where they were held for over two months. During her time in detention, as her pregnancy progressed, Esther lost 20 pounds.

Critics say experiences like Esthers are becoming more common as pregnant migrants whether minors like Esther or adults are being detained in increasing numbers and for longer periods of time as the Trump administration cracks down on border crossings. Under the Obama administration, Immigration and Customs Enforcement (Ice) had a policy of presumption of release for all pregnant women, except under extraordinary circumstances.

Pregnant women shouldnt be in detention, period, said Dr Ranit Mishori, an expert medical consultant for Physicians for Human Rights and professor of Family Medicine at Georgetown University School of Medicine, referring to the Trump administrations decision to overrule the previous policy in March 2018.

In February, a 24 year-old Honduran detainee went into premature labor at the Point Isabel detention center in Texas and gave birth to a stillborn baby. Ice later revealed that as many as 28 women had miscarried in their custody in the last two years.

Migrant advocates and pregnant asylum seekers waiting to cross the border in Tijuana have heard about the increase in miscarriages while in Ice custody.

There have been anecdotes of women having miscarriages in detention and Ice officers denying they were ever pregnant, so were offering pregnancy tests for those who want a record of their pregnancy, said Phil Canete, lead coordinator for the Refugee Health Alliance, a clinic based in Tijuana.

Esthers description of her time in detention offers a stark picture for a pregnant woman, especially one whose first child had been born premature. Mishori said Esther being a minor also increases the risk for her second pregnancy.

Esther said that during the week she and the other detained minors at her facility were only given two meals a day.

On a typical weekday she was woken at 5am and given a prenatal vitamin that made her nauseous. At 6am she had breakfast, and at 7am she and her daughter were separated for the day and she went to class until 4pm. She said some teachers brought them a snack of apples or pears, but on most days she said she didnt eat again until dinner at 5pm.

[Esther] didnt receive adequate nutrition and thats very concerning and can affect her and obviously the fetus, said Mishori.

Esther suffered from daily nausea and vomiting, which Mishori said is common for the first trimester, but that its vital pregnant women continue gaining weight.

In addition to being hungry, Esther recalled constant fatigue, as she was often not allowed to return to her room to rest between her 5am wakeup and her 10pm bedtime.

When you think about a woman in that first trimester its a period of very great physiological changes that often cause women to be more tired, Mishori said.

In a statement to the Guardian, Patrick Fisher, a spokesman for the Department of Health and Human Servicess Administration for Children and Families, said that every child in custody receives three meals a day plus snacks in addition to other services such as medical and mental healthcare, education and recreation.

Esther said that during her time in detention she was taken to three medical visits, and at the second visit she was given an ultrasound and told her baby was a girl. She said the doctors did not mention her weight loss as a problem but did tell her she needed to be drinking a lot of water, which was readily available in the facility.

Despite having several family members in the US prepared to be her sponsor, it took two months for Esther to be released.

Esther and Aldana decided to flee Honduras because a group of narco-traffickers started killing Aldanas family members one by one after his brother refused to hand over his small plot of land. They traveled by foot and bus with the migrant caravan to reach the US-Mexico border, where they waited two months for their chance to turn themselves in.

Aldana was transferred to a detention center in Louisiana where he has been for more than seven months now. Esther said her daughter and husband have always been close but they became especially attached in their last month together because he was always the one holding her; he didnt want any heavy lifting to hurt Esthers pregnancy.

When he calls, I hold the phone to Milagros ear so she can hear him, but she doesnt say anything, she just cries, Esther said.

They both hope hes released from detention before her baby is due next month, but they have no idea if that will happen.

About Esther and her time in detention, Mishori said she ticks a lot of boxes of some of the most vulnerable people: being a woman, pregnant, having a child and being a child herself.

So, thats sort of the big picture here, that she shouldnt have been in detention at all, Mishori said.

This reporting was supported by the International Womens Media Foundations Reproductive Health, Rights, and Justice in the Americas.

← When do the clocks change around the world? And why?
Food, supplements and a first triathlon →