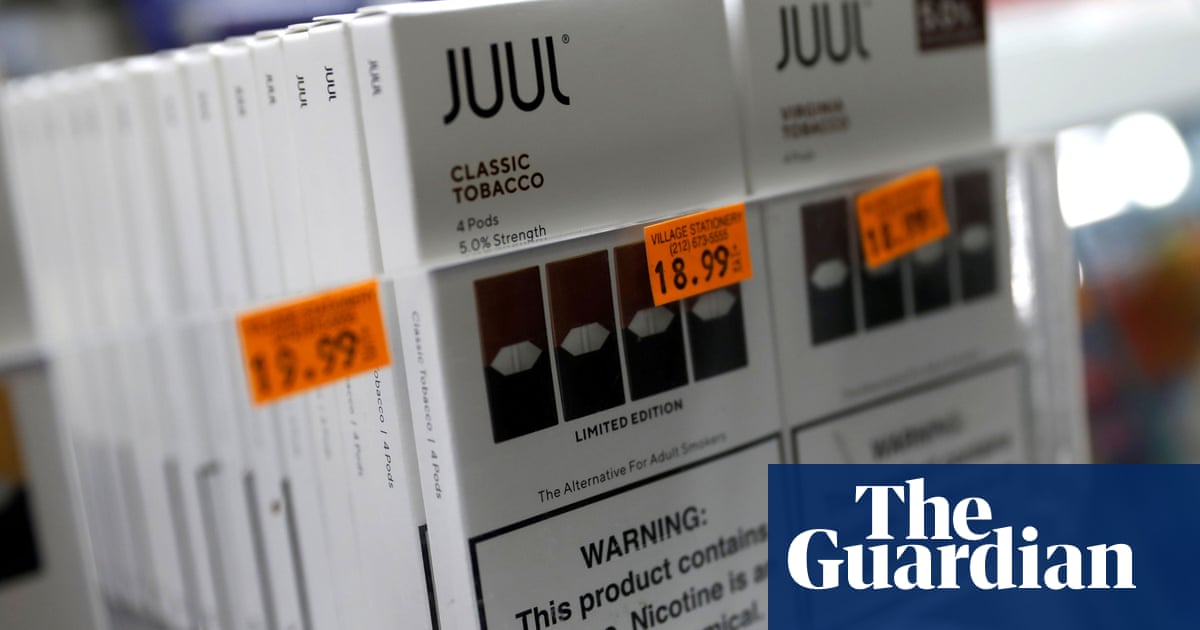 Juul Labs chief executive Kevin Burns stepped down from the tobacco vaping company on Wednesday amid growing concern about teenage vaping, the safety of its products and legal challenges.

Burns will be replaced by KC Crosthwaite, chief strategy officer at Altria, the tobacco giant that is Juuls largest shareholder. Altria also announced it was ending merger talks with Philip Morris International, a deal that would have reunited the Marlboro maker with the parent company that sold it off a decade ago.

Hundreds of vaping-related illnesses have been reported across the US and nine deaths have now been linked to the lung ailments. As of 17 September , the US Centers for Disease Control and Prevention had identified 530 cases of lung injuries across 38 states, many of these cases involve the vaping of tetrahydrocannabinol (THC) the high-inducing chemical in cannabis.

The news came as Massachusetts imposed a four-month ban on all tobacco and marijuana vaping products, the toughest move against vaping by a US state so far. Two weeks earlier president Donald Trump announced a ban on flavored vaping products as several states including New York and Michigan stopped sales of flavoured vaping products, which appeal to younger smokers.

The state ban came after Walmart announced it would stop selling all e-cigarettes and the Food and Drug Administration opened a criminal inquiry into the supply chain of vaping products and devices.

Massachusetts Republican governor, Charlie Baker, said: Were declaring this public health emergency because medical and disease control experts have been tracking the rapidly increasing number of vaping related illnesses that in some cases have led to death.

The use of e-cigarettes and marijuana vaping products is exploding and we are seeing reports of serious lung illnesses, particularly in our young people, Baker told reporters on Tuesday. The ban was ratified unanimously by the states public health council less than 90 minutes after the announcement.

A study by the University of Michigan Ann Arbor showed that one in four high school seniors reported vaping a nicotine product in the previous 30 days. Forty-one percent of all youth in Massachusetts reported trying e-cigarettes in 2017. The rate of usage is six times higher in high school students than adults.

E-cigarette store owners think the ban will only grow the unregulated black market for vaping products, which are less safe for consumers who will pursue them anyway. They also claim bootleg THC cartridges that contain vitamin E are what are causing deaths and lung illnesses not legal products sold at vape shops.

One shop owner said Baker was shuttering many businesses with the policy change, and is creating a black market. Governor Baker just signed a death sentence for Massachusetts residents who have found a healthier alternative to smoking, said Steve Kaltsas, the owner of Hookahs and Vapahs in Dracut, Massachusetts.

Not a single illness or death has been linked to a legal vaping device. To ban a legal, regulated product proven to be 95% safer than combustible cigarettes is the height of insanity, said Tim Andrews, Taxpayers Protection Alliances executive director.

Altria and Phillip Morris are pressing ahead with the launch of their own vaping product, IQOS, in the US. Unlike Juul, IQOS has been authorized by the Food and Drug Administration.

← The Trick To Cooking Asparagus You’ll Actually Want To Eat
‘We’ve bred them to their limit’: death rates surge for female pigs in the US →