The sculpture of the football legend was lambasted when it was unveiled at Madeira airport. One year on, Emanuel Santos has had a second shot with disastrous results 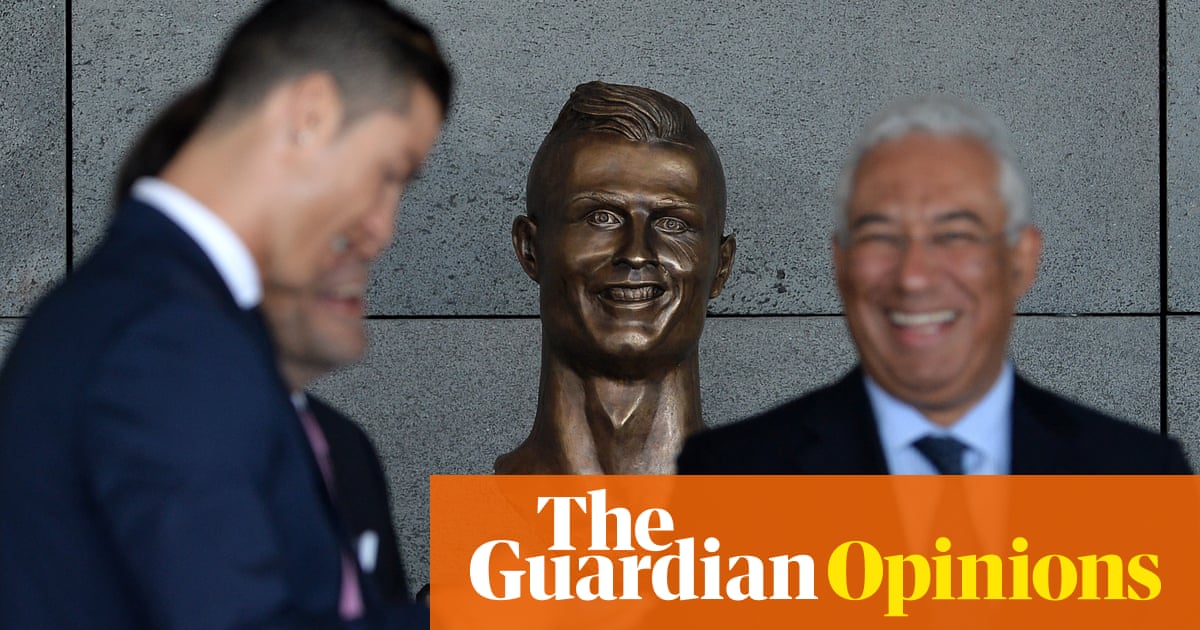 The eyes of great paintings follow you around a room, but his cant seem to focus. Emanuel Santoss bust of Cristiano Ronaldo is an exaggerated, silly depiction of the Portuguese footballing legend. When it was unveiled in 2017 at Madeira airport, it was met with universal derision. People mocked Santoss work, social media exploded in ridicule, headlines around the world decried the sculptures awfulness. Suddenly, this sculptor was the most famous artist in the world.

Santos was eventually left to lick his wounds in anonymity. Until last week, when the sports website Bleacher Report decided to peel open the scab. Like a modern-day House of Medici with added banter, they commissioned Santos to remake the sculpture to atone for his supposed sins.

The 10-minute video of his artistic redemption is brutal. Santos and his wife repeatedly break down in tears recalling the days that followed the unveiling. The producers plonk him next to his original sculpture at Madeira airport or, to give it its full title, Cristiano Ronaldo international airport and ask a tide of vitamin D-deficient tourists their opinion, who are unaware that the artist is stood right next to them. Doesnt look anything like him, its not very good, try again they spout while Santos grimaces. Its the public flaying of Santos for clicks.

Then they film him sculpting pounding, scraping and moulding before taking the new bust to be cast. He cracks open the wooden box with the new work in front of the original. Staring down at this severed head in a box, he says: Its very good. As if its by someone else. What youve just watched is an artists soul die.

Neither sculpture is a true likeness of the subject, but the first undermines the hero-worship of the idol he is fallible, wrong, off-kilter. The second is more acceptable because it adheres to the guidelines of Brand Ronaldo, showing him as powerful, chiselled, perfect. While the first is almost iconoclastic in its flawed depiction, the second is a reassuring statement that we are mortals and Ronaldo is not.

I reply on Twitter to Bleacher Reports announcement of the new sculpture by saying that the original is better. I receive countless replies from people with handles like @VivaLaVardy and @Gerrxrd, anonymous grown men with footballers for profile pictures. They call me a nonce, an irrelevant prick. My favourite says you reek of piss you virgin. Its nasty, but its people actually engaging with art and its been decades since weve had a shark in formaldehyde to send some people into conniptions.

So why are people offended by the first bust and not the new one? In this scenario, the social media masses have become censors, ensuring that the tenets of representational art are adhered to. Its a modern take on socialist realism, with rules enforced not by the state but by the worshipful public. Vast numbers of people still expect and want art to be purely representational, and that is a sad indictment of contemporary art education. We are post-Rodin, post-Brancusi, post-conceptualism, and still Santoss sculpture is an artistic failure to the majority.

The original really is a better sculpture. Its an ecstatic mess, its face a hybrid of Ronaldo and Santoss, two sets of features squidged together. Its the artist seeing something of himself in the rags-to-riches glory of Ronaldo. Its feverish, intense; the work of someone driven obsessively. The new version is someone forced into a do-over to save face. Whereas the eyes of the original bust seem pointed in a thousand directions joyful, unfocused and giddy the eyes of the new one look to a faraway point. They are lost, cold, sullen. This is a dead sculpture, an acceptance of defeat in the face of public outcry. And it will be immediately forgotten.

Look, they are both bad sculptures. The first one is ludicrous, the second one is bland. But at least the first one is an honest representation of the artists intentions. Santos admits that if he hadnt made the first sculpture the way he did, it would have been forgotten about long ago. No matter how few people see the positive side of the work, they are enough to give us strength, he says. You have to hope he finds the strength to make the art thats in his heart again.

← ‘I didnt get arrested, I got rescued’: jail is a lifeline for some pregnant women
A Brief Summary Of The James Charles YouTube Drama Betches →