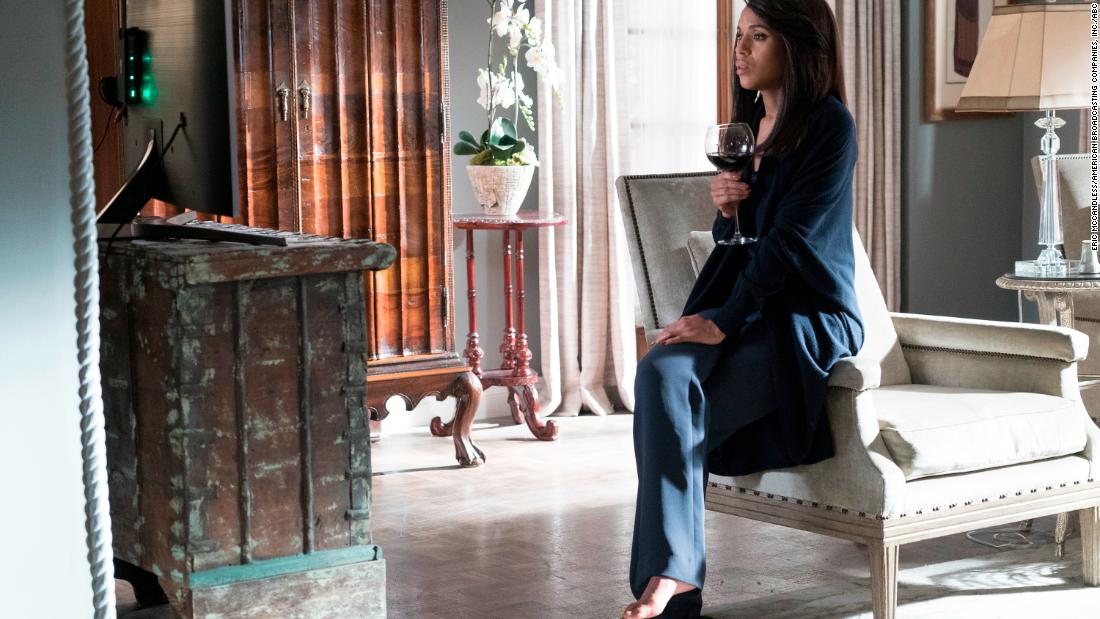 In a shrewd move, the entire season built toward a major showdown, elevating the slippery Cyrus (Jeff Perry) from vice president to near-Bond-villain status in plotting to wrest the White House away from the president, Mellie (Bellamy Young). Cyrus was joined in that endeavor by Jake (Scott Foley), whose garage exchange with David (Joshua Malina) was one of the finale’s highlights.
Thwarting the scheme meant exposing B613, which has always sounded more like a vitamin supplement than a clandestine organization run as a shadow government.
In “Scandal’s” world, the vice president can murder the Attorney General, and that wasn’t even the most outlandish thing that happened within the hour, inasmuch as a Senate committee kept a huge secret, and the president was actually able to push through gun-control legislation.
At its core, the show’s beating heart belonged to Olivia Pope (Kerry Washington), the D.C. fixer/crisis manager/political consultant, and her on-and-off relationship with the former president, Fitz (Tony Goldwyn), who never seemed able to quit her, and vice versa.
Olivia and Fitz enjoyed one last gauzy frolic in 600-thread-count sheets, and appeared ready to ride off into the sunset together. Still, Olivia’s most significant act involved pushing herself away from the proximity to power that she had enjoyed and coveted, when asked what else she would do saying, “Whatever I want.”
It was clearly a moment of reclaiming her soul, in an episode that even offered a kind of redemption to Olivia’s dad, Rowan (Joe Morton). Unexpectedly, he sold out the entity to which he had devoted much of his life by joining Olivia and her pals in testifying about B613 before the aforementioned committee — one of those rapid-fire monologues in which Rhimes specializes — serving up Jake as a sacrificial lamb.
All told, the finale felt both ridiculous and wholly appropriate. Admittedly, this appraisal doesn’t come from a “gladiator,” an allusion to the show’s die-hard loyalists, but rather somebody who thought it was bad in the early going, and tolerable once it adapted and embraced the crazy.
The net result was a show punctuated by powerful highlights (the abortion episode comes to mind), more notable for how cleverly it pivoted by playing to the social-media age than the drama itself.
Despite the setting, “Scandal” was less about politics (a lot of those flourishes were exaggerated to the point of not making much sense) than the corrupting influence of power, using Washington’s corridors as the glamorous backdrop for a primetime soap, mixing its steamy relationships with wild deep-state conspiracies.
Although Rhimes’ “Grey’s Anatomy” and other creations continue on ABC, the end of “Scandal” does feel like closing a chapter, especially with the producer taking any future projects to Netflix.
Yet if this was a sort-of farewell to the Shondaland brand at its height, “Scandal” delivered an hour that felt very much in keeping with what preceded it, which is what any good finale should aspire to do. Viewed that way, ABC’s “TGIT” gladiator went out in a manner that, to its credit, didn’t leave anything on the battlefield.

← Doctors Explain Why Eating Salmon Is So Damn Good For Your Skin
Marijuana shops recommend products to pregnant women, against doctors’ warnings →